TGZ: Thank you for attention to be interviewed, Hugo. I take this opportunity to congratulate the 12 years of the Nazarene Denying in 2015. I would like to talk about the history of the band so far, cast materials, influences...


Hugo Fuenzalida: Thank Carolina for your space, we've been 12 years playing Death Metal, we have to date two demos, one EP and two albums, many changes in the line-up which is stable since the end of "Possessed by the Ligtht and Deception", that he retired our bassist David Barakke which was replaced by Francisco Cornejo who has extensive experience playing Death Metal, the past year salio our 2nd album "Possessed by the Light and Deception" which came out in vinillo format in mid-2014 and now soon released in CD format, sales of this have been pretty good and has tenedio a pretty good reception from the public. 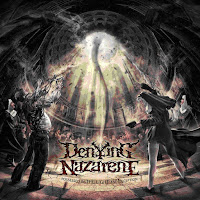 This album was recorded in 2013 with Juan Pablo Donoso in Sades here Studies in Santiago consists of 9 sections in the vein of a Brutal Death Metal pretty nuanced and with many sudden changes in speed, adorned with guitar solos and a great performance vocal.


TGZ: What can we expect from this album celebrating the 10th anniversary of the band?

H. Fuenzalida: This album is super important for us, have spent 11 years of our home by 2003, which represents a maximum degree of maturity in the creation of this one, from 2007 until now have gone through various processes, including many changes alignment that allowed finally afiatarnos style presented in this album is a stylish ultra packed full of blastbeat executed to perfection with many technical touches and details that adorn the composition, the disc is not flat, has many shades abrupt changes of speed and soft ornamentation along with a great guitar solos and a great vocal performance.

The album is very special everything was done to be considered as unique and perfect fit. 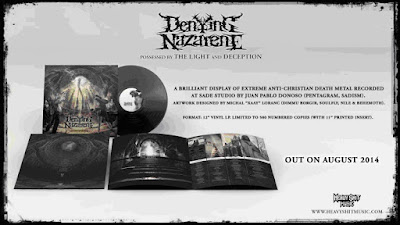 youtube.com/A Nun's Pleasure* This is the 6th track from the new album "Possessed by The Light and Deception", from the chilean Death Metal Old School band Denying Nazarene, released in august of 2014 by Heavy Shit Music, and, according to Heavy Shit The recording was made in less than six months, between march of 2013 up to september, in Sade Studio by chilean producer Juan Pablo Donoso and the artwork was designed by Michal "Xaay" Loranc (Dimmu Borgir - Soulfly - Nile - Behemoth).

TGZ: How do you see the scene in Chile and Latin America? What are the major difficulties faced by the band?

H. Fuenzalida: Death Metal scene in South America has always been very important to many bands and of very good quality and new groups are even better, it makes sense that growth has not stopped the scene, making it even more important. The serious problem I have seen is always funding, but I think that little by little it has to been solved, every day it grows more and therefore there are more people interested in producing events and releasing albums.

TGZ: What do you know of the Brazilian scene? What are the bands that most attracted your attention?

H. Fuenzalida: Brazil know many bands that have always been an inspiration to me, I could nnombrate many bands all day but some are: Sepultura, Sarcofago, HeadHunter DC, Torture Squad, Ratos de Porao, etc...

TGZ: Any chance to play in Brazil?

H. Fuenzalida: There have been talks but nothing concrete, we'd love to go to Brazil to play, is a great country and the metal scene is very lively also.

TGZ: What can we expect from Denying Nazarene for the next 10 years?

H. Fuenzalida: Denying Nazarene at the moment working on his third discotenemos many ideas and eager to continue doing Death Metal so we have energy for a while.

TGZ: Hugs to all of Denying Nazarene, especially to you, whom I thank for the interview. Once again congratulations for 12 years of band! Greetings!

H. Fuenzalida: Carolina thanks for your space and patience, we hope to be soon in Brazil providing all our music;